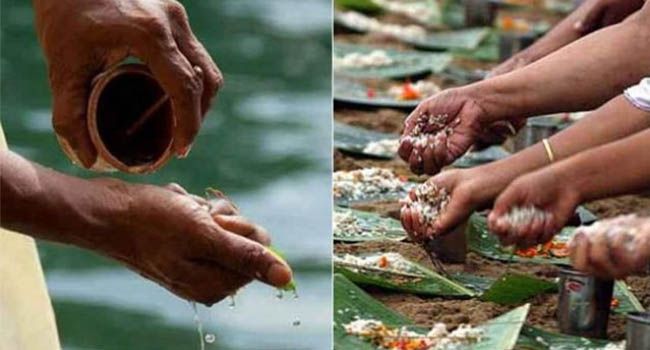 In 2022 , the auspicious period for offering prayers, Tarpan and doing charities in the name of ancestors is starting from 10th of September and shall culminate on the 25th of September 2022.

Auspicious activities like marriage, Mundan, entering a new house, starting a new business etc are not done during Shraddh period and only activities related to Prayers, Puja, Havan, charity  etc in the name of ancestors are done in this period.

HOW TO PERFORM TARPAN DURING SHRADDH PERIOD:

These fifteen days are a period of austerity for the person who offers food and water for their departed ones. The Shraddh period starts from Purnima tithi but the actual Tarpan etc is performed from Pratipada Tithi. Therefore ,  starting from the first day ie the pratipada tithi, one should take bath in the morning, wear a Kusha Grass ring  and facing southwards  should offer water along with black sesame seeds and rice grains in it ,  to all the ancestors especially the ones who have died on the pratipada tithi of any paksha.

One should also offer kush ( a kind of grass considered sacred in Hinduism), rice, flowers, black sesame seeds, sandalwood paste , barley to the ancestors along with water. One can also make food in the name of the ancestors and feed it to a Crow, a Cow, a Dog, an Ant and a Brahmin on their name.

Text References of Shraddh from Purana’s  :

Pitrapaksh Shraddh is also known as Sarva Pitru Moksha  Shraddhas and the best and the most auspicious times to perform the rituals are the Kutup Muhurat, Rohina & Aprahana time ie during mid day and afternoon timings…

Mahabharni Shraddh is generally observed during chaturthi (4th day) or panchami tithi (5th day) and is an important day for performing rituals as Lord Yama rules this Nakshatra (constellation).  In 2022 Mahabharni Shraddh falls on the Panchami Tithi ie on the 14th of September.

The Navami Shraddh also known as MatruNavami or Dokra Navami or the 9th day of the Shraddh is significant as on this day offerings for all the female deceased members in the family can be made. This will fall on the 19th of September 2022.

Similarly on the Ashtami tithi ( 8th Day) shraddh for all the male members can be performed.

Trayodasi shraddh ( 13th Day) is specially performed for all the deceased children. Magha Shraddha is done during Pitru Paksha when Magha Nakshatra prevails during Aparahna Kala.

Shraddh period starts from 10th September and continues till 25th September in 2022.  Shraddh rituals are done during the mid afternoon period and is over before the Aparahna muhurat .

The best time to perform the rituals on the Sarvpitra Moksha Amavasya is from 11:48 am – 3:50 pm.